Based on a nine year teaching career, in Japan - Sabino offers a myriad of invaluable advice on how to progressively develop a very interesting career all the way from teaching in the conversation school to teaching in university jobs. Although Sabino`s focal point - regards career opportunities - is teaching English, Working in Japan, additionally examines life in Japan, at the most fundamental level; from cultural taboos, to domestic ambiguities, to how to save money, most efficiently, and hassle-free. Working in Japan, also, examines another existential situation that many foreigners apparently find themselves in, after, either relocating to Japan after choosing a career in whatever profession, or from marrying into a culture that is so very different from their own. 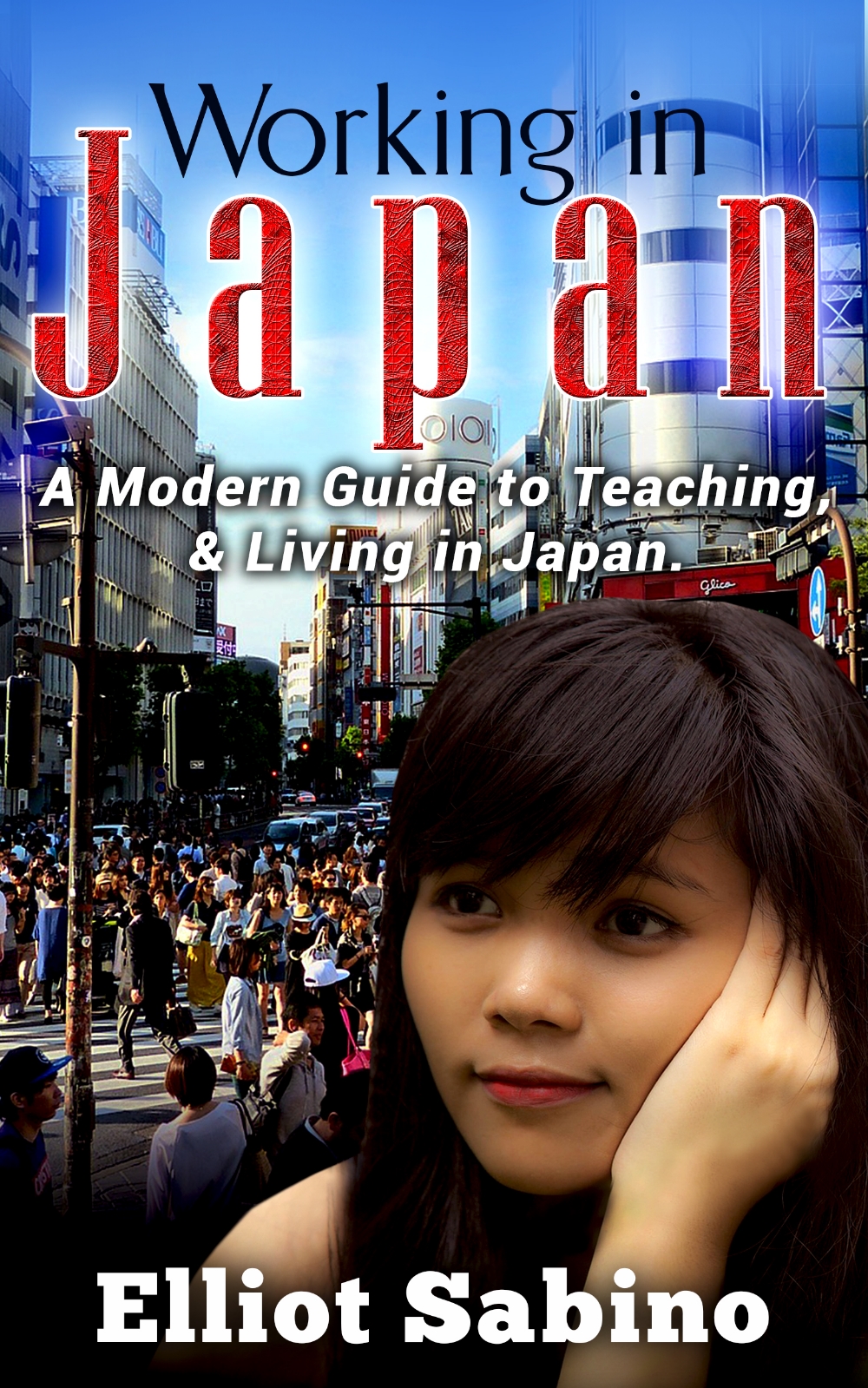 If you buy your books from Amazon Kindle, please be aware that as of January 2016, Amazon are now taking more than 70% of authors` money. This means many authors are paying tax to a country of which they are not, have never been, nor ever will be, citizens. If you`re interested in the work of "any" author, please find the author`s website, and buy the book directly from there. In this way you`re helping authors rightfully receive most of what are their entitlements for their hard work.  Thanks ... Sabino. 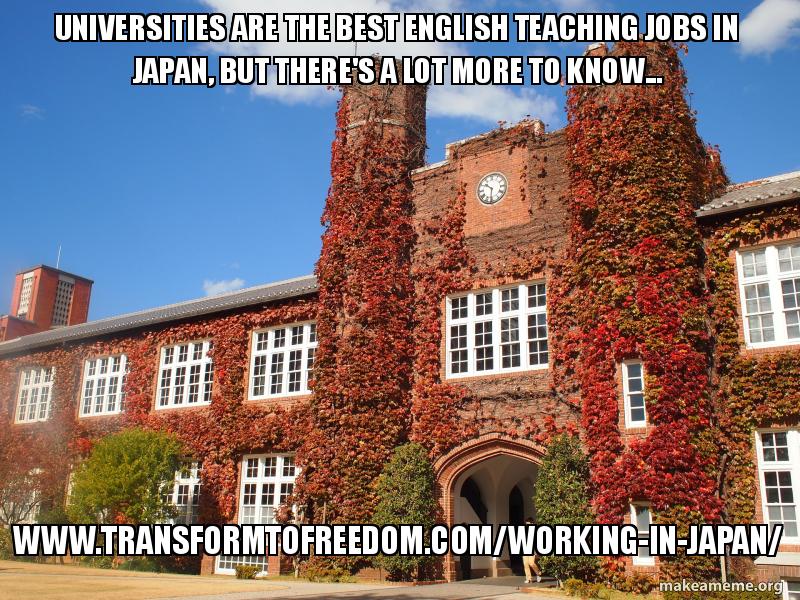 Obviously, university teaching is the best English teaching job you'll get in Japan. But, you'll need at least a Master's degree, 3 years experience, and 3 publications in recognised EFL Journals. There's also a lot more you need to know. To name one example: even though working part-time is a real socio-economic "stigma" in Japanese culture, there are several very good reasons why it is the best option. So you'll need a litany of part-time jobs, in order to survive, and it's getting harder & harder, for several reasons. "Where are the best places to work? Where do they advertise? What else do I need to know, and where can I find this information"? 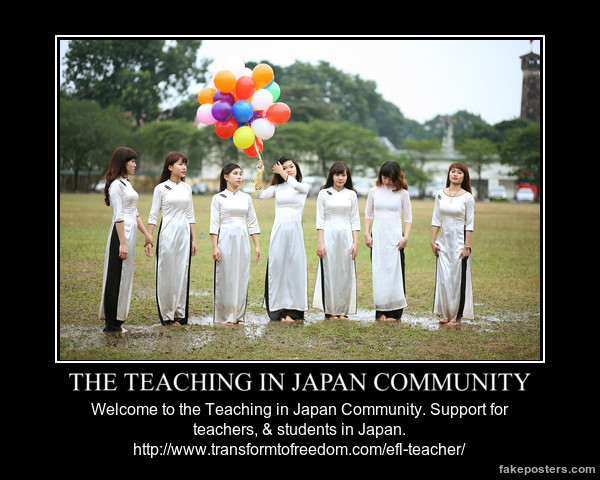 The Teach in Japan Community has been set-up to assist those new to Japan, or those considering going to work in Japan - particularly, as English teachers. Find us on FaceBook, and ask any questions, or make any comments that you feel may assist in this regard. 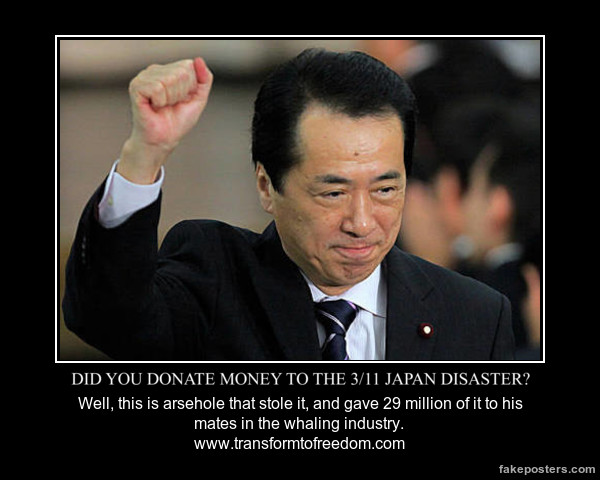 `Though commercial whaling has been banned for decades`... Japan [continues to keep its] `19th-century dream alive` (Mahr 2011:para 3-1), Time journalist Krista Mahr, quotes Junichi Sato, Head of Greenpeace Japan, in observing that `“Pouring billions of yen into Antarctic whaling during this time of crisis is downright shameful,” [and that] “Japan cannot afford to waste money on whaling in the Antarctic when its people are suffering at home”` (Mahr 2011:para 3). The government gave, `$29 million of the national post-tsunami recovery fund ... to the whaling industry, including to provide extra security for the whaling fleet,` despite the fact that, recent polls have shown that 95% of Japanese eat whale meat rarely, if at all` (Mahr 2011:para 2).”

A MODERN GUIDE TO TEACHING & LIVING IN JAPAN.

Do you know anything of the "punishing" work conditions, in Japan? Did you know that there`s a way to avoid paying the majority of Citizens Tax? Do you know how to get your pension money back, after leaving Japan, and why you should never pay more than 36 months into Japan`s pension scheme, if living and working in Japan?

Do you know anything about the culture and why it demands absolute loyalty, and an anachronistic worship-to-servitude? Do you know what are the best employment conditions, and do you know how to secure them for yourself?

Do you know why 61% of Japanese men - up to the age of41 - are in no form of relationship? Do you know why almost 50% of girls - aged 16 to 25 - state that "...the thought of sex is disgusting", and why 21% of boys - in the same age-group - state the same?  Do you know why women are choosing careers ahead of family, at staggering percentages?

Do you know that  Japan`s birth rate has fallen for the 48th consecutive year, and that schools, universities, & entire towns are closing down?

Do you know that the Japanese Government are not telling their own people - let alone the people of the world - that the Fukushima Nuclear Power Plant can "never" be repaired, and that the damage from that disaster IS FAR WORSE than most people know?

Get a FREE PREVIEW COPY of this book:

The purpose of this book is advice and information for those considering going to Japan in the near future, for those already living in Japan, or for those who are just interested in Japan and the Japanese culture. As such, several elements have been included in this book by way of an investigation. The opening chapters are an examination of the cultural and social issues that are apparent in Japan, today, including the staggering numbers with regards to the declining birth rate; those who are choosing to remain, single due, seemingly, to anachronistic attitudes towards gender-roles within marriage, and a subjectively, incomprehensible attitude towards the most intimate forms of human connection. Any sensible author would never dare to even address such issues without citing supporting evidence from credible sources, and better yet, credible witnesses “from within the culture” being examined.

The chapters that are, essentially, the second section of this book, are for those specifically interested in teaching English, in Japan. Centrally, there is an examination of work conditions all the way from the international pre-school to the university. There is advice on how to get the most suitable employment for you, depending on your individual needs and desires. There is contained - in this section - an outline of some of the bureaucratic issues you`ll encounter and how best to respond to them. There is an illustration of the type of behaviour that is expected from you, by colleagues and students. This may seem like a ridiculously patronizing concept, but one may be surprised at just how different the cultural practices are to what one may be used to, and - in Japan, or perhaps any Asian culture - these small considerations can mean the difference between success, and an early flight “home”. Additionally this section contains links to materials and resources, and a step-by-step guide as to “how to teach an English language lesson”: links to teachers/workers unions, information for any employee in Japan, and links to the websites that advertise the best teaching positions, in the best institutions.

The final chapters of this work deal, initially, more with pragmatics, and the day to day living and surviving, as a foreigner, in Japan, regards renting accommodation, food, commuting. Advice is included, hereafter, regards how to avoid paying too much tax, how to have your pension returned after leaving Japan, and some advice regards socializing with the Japanese. This section, additionally, deals with some political type issues, by way of an attempt at understanding why, apparently, certain curriculum is “omitted” from schools and universities even though lip service is given to its importance. An essential element in this section is some evidence as to what we`re not being told regards the Fukushima Nuclear Power Plant, and its far reaching effects, not just within Japan, but for the whole planet. 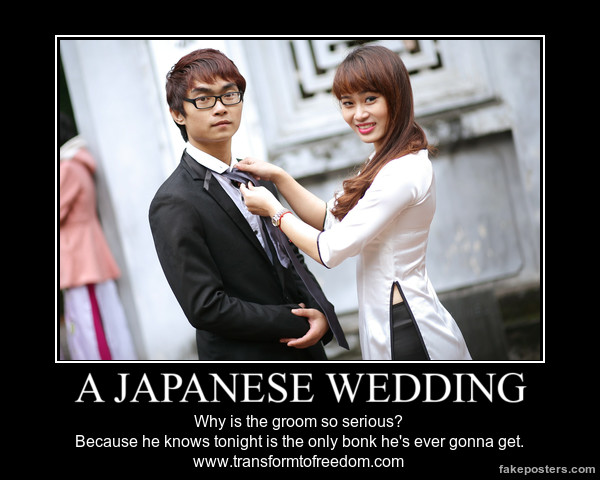 Sure, this meme comes across as very cynical, but the evidence is there, and the numbers and statistics are just getting worse and worse: In one survey, “61% of Japanese males over the age of 40 stated that they are not involved in any kind of relationship. Almost 50% of girls aged between 16 & 24 stated that the thought of sexual intercourse was uninteresting or even disgusting. More than 21% of boys from the same age-group stated the same” (Morgan/Newton, Journey TV, 2014).

This however, is where it becomes seriously ... disturbing, and it is, we believe, a window to the real issues, 'Many people who seek her out, says Aoyama, are deeply confused. "Some want a partner, some prefer being single, but few relate to normal love and marriage"` (Haworth. A, para 6, 2013). `“I’m not interested in real-life sex. Just watching those videos is enough,” he [Nakamura] says` (Osaki, para 19, 2015). `Aoyama believes the country is experiencing "a flight from human intimacy" – and it's partly the government's fault` (ibid, para 2, 2013). Have these issues always been apparent in Japanese culture? If so, have these issues burgeoned, in this high-tech, instant-gratification, ultra-materialistic ME-Generation, that Japan has, apparently, embraced?